Climate change affects humans and natural environments today and particularly in the future. Like any art form, music can change our approach to the changing world, communicate insight on climate change and help to process emotions. Therefore, music plays an important part in understanding climate change in-depth and building a climate-friendly world. 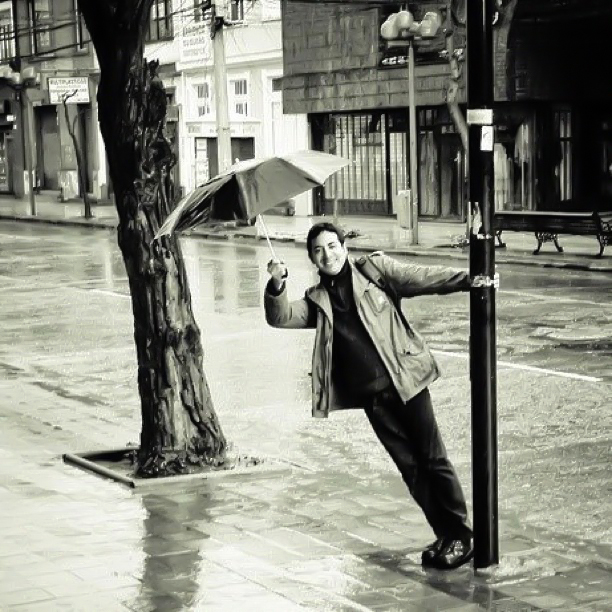 The Role of Music in Climate Change Action 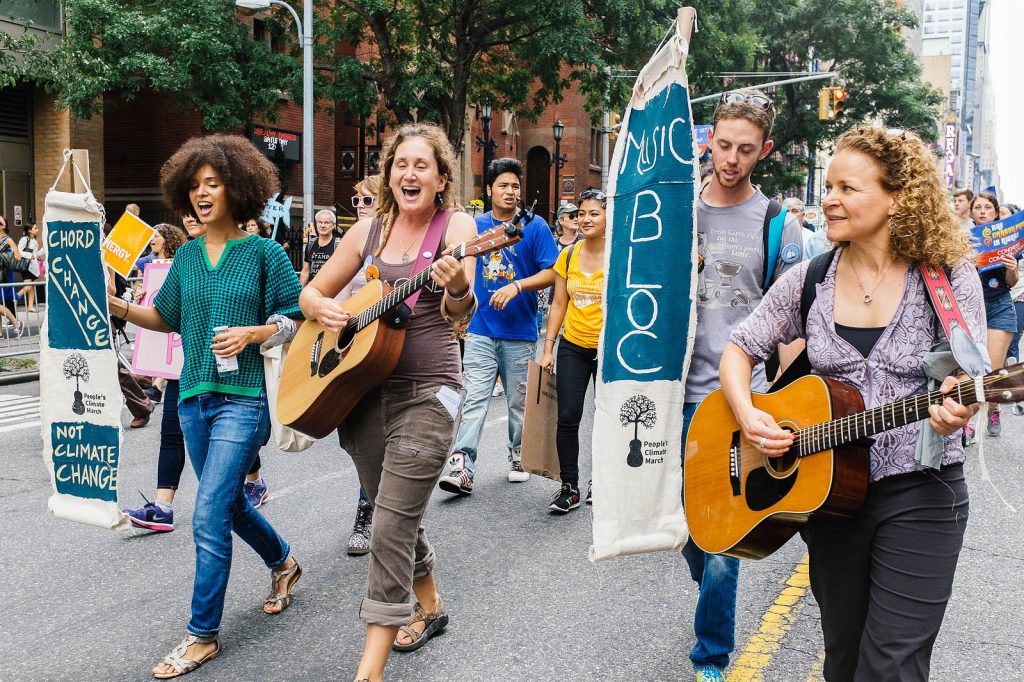 Art can be seen as an activity that aims to critically observe and change our situation and fixed ideas about reality. Thus it’s not surprising that environmental issues embedded in our society have become popular in socially and culturally engaged contemporary art. Art also discusses topics, values and meanings through emotions, unlike fact-driven natural sciences and engineering. Therefore, art has great potential to change our worldviews.

Like music in general, songs about climate change affect their listeners in many ways. In addition to the tune and lyrics, even the title may have an impact on the listening experience. Since environmental issues are collective basic experiences of modern times and constantly present in human consciousness and activities in one way or another, even subtle references to environmental themes may trigger thoughts and emotions in the listener. Experiencing lyrics or music doesn’t happen in a vacuum but in the wider cultural and communal context. A critical approach to environmental issues can be activated and consciously adopted when listening or making music. Also the following facts may help to realize the role of music in raising active citizens taking action against climate change:

Over many decades, musicians have communicated climate problems in their songs. Among famous songs inspired by environmental degradation are Joni Mitchell’s Big Yellow Taxi and Michael Jackson’s Earth Song. Climate change has inspired some songwriters, but there have not been huge hits about the topic, perhaps due to its complexity.

Musicians can inspire their fans to become active citizens by speaking out on climate change. For instance, Paul McCartney, Katy Perry and Pharrel Williams have discussed climate issues in interviews, blog posts and climate campaigns.

Music has also been used to communicate the latest climate science. In 2013, a cello piece entitled, A Song of Our Warming Planet, came out which illustrates changes in global temperature over 133 years. In 2015, it was followed by a composition for a string quartet that highlights the rapidly changing climate on different continents. 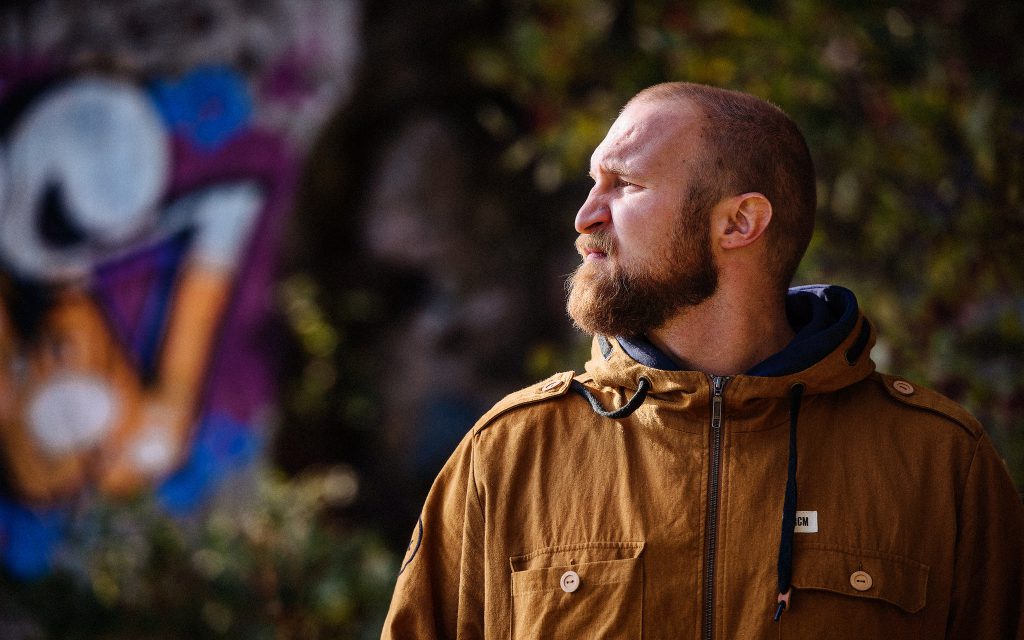 How Non-Governmental Organisations use Music in Climate Change Campaigns

Songs and singing can make a difference in society. For example, in Estonia, popular song festivals among other factors played an important role in the country regaining its independence after the Singing Revolution in 1991.

Music is also a tool for climate change advocacy. The Big Ask campaign initiated by Friends of the Earth put pressure on governments around the world to adopt new climate change legislation.

Emotive music plays a central role in The Big Ask short film. In Finnish Big Ask “Human flood” event participants demanded change by singing the song on the streets and steps of the Finnish parliament. The campaign invited celebrities to spread the word about climate change and attract more supporters. 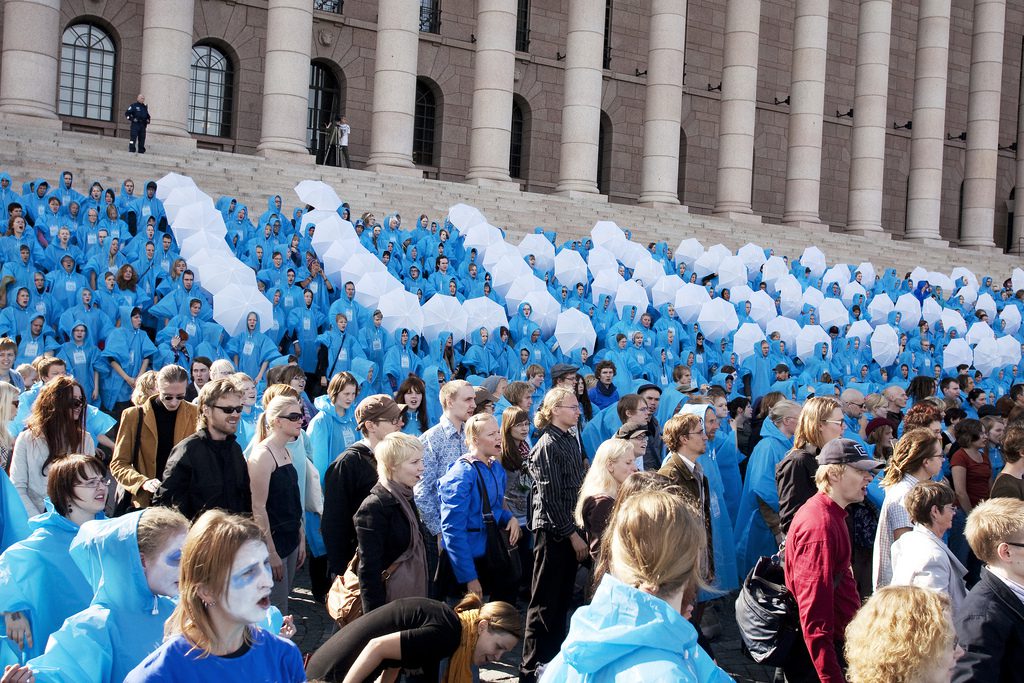 How Music Helps to Process Emotions

Music is a language of emotions, something humans have always used to express joys and sorrows. Like other art forms, music can affect us on an unconscious level and evoke unexpected emotions. Music can also help to process and solve complex emotions. Playing and improvising music transform emotions into tangible form. Playing and singing can be cathartic, a therapeutic experience.

There is no need to create a division between art and science subjects or the emotional and rational realms. In fact, art can be considered a branch of science – it can be, for instance, mathematical – and it’s good to keep in mind that emotions and value judgements have impact on scientific research. However, it is an incontrovertible fact that art education promotes emotional intelligence, which also is needed in combat against climate change.[/su_spoiler]

Weather affects our mood. In popular music, weather is often used as a metaphor for emotions. Sun refers to something positive, whereas rain has negative connotations. For instance, in the song Ain’t No Sunshine, change in the weather refers to a relation breakup.

Climate change affects weather in many ways, for example, by increasing extreme weather, which may have an impact on song lyrics. In the future, songwriters might write more about bad weather and extreme heat when they have become more common for many people around the world. In the 1950’s during the active hurricane season, many songs were inspired by wind and storms, so it might as well be that extreme weather changes in the future will have an impact on song writing. Cheerful songs about summer, sunshine and gentle breezes might become darker.

Music as a Tool to Fight Climate Change

Climate change tends to trigger strong, negative emotions, such as anxiety, fear and helplessness, which are often supressed and denied. Music can help to process them.

Managing emotions can be done either externally by taking an action, or intellectually as an internal process. Playing, singing or song writing can provide ways to actively process emotions and life events. Music also encourages intellectual processes by evoking ideas and images in listeners.

Adults are normally capable of dealing with their ups and downs, whereas young people are learning how to cope with their emotions. Both listening and creating music can have many positive effects on mood and mental health. Favourite songs give comfort, help to channel rage and face difficult issues. Venting anger or rage may require aggressive or intense music, whereas melancholic music may pacify.

Music can teach us about human relationships, loving and caring, and it can strengthen unity and social bonds. Additionally, multicultural music encourages the understanding of other cultures and their ideas of beauty.

Creating or receiving art allows us to examine emotions safely without being overwhelmed by anxiety. We often project our emotions onto music we might consider, for example, sad or angry. When we realize these emotions are not only about music but ourselves, it is possible to vent and process them from a safe, symbolic distance using music as a tool.

Music therapy includes listening as well as creating music with the voice or instruments. In addition, painting and moving with music and drawing inspiration from it are popular methods.

Music therapy improves health in several domains. It helps to channel unconscious impulses, vent emotions, give comfort, distance oneself from difficult issues, process emotions, strengthen ego functions and increase self-knowledge. In other words, music acts as a mediator between the conscious and the unconscious, and it provides interaction, aesthetic pleasure and enjoyment.

1. CLIMATE CHANGE SONG
Write a song about climate change.
2. CACOPHONY ORCHESTRA
Each student is given an instrument. Read aloud the following sentences while students explore emotional and musical responses to them. Here are some examples:

NB: All the following songs are not directly about climate change.

These images can be reused under CC licence. Add any required credit for the photographer or company who own the copyright of the photo you use.
See copyright information and original photos in Flickr gallery.